Is SOCIAL MEDIA stealing your joy?

Happiness is found when you stop COMPARING yourself to others. 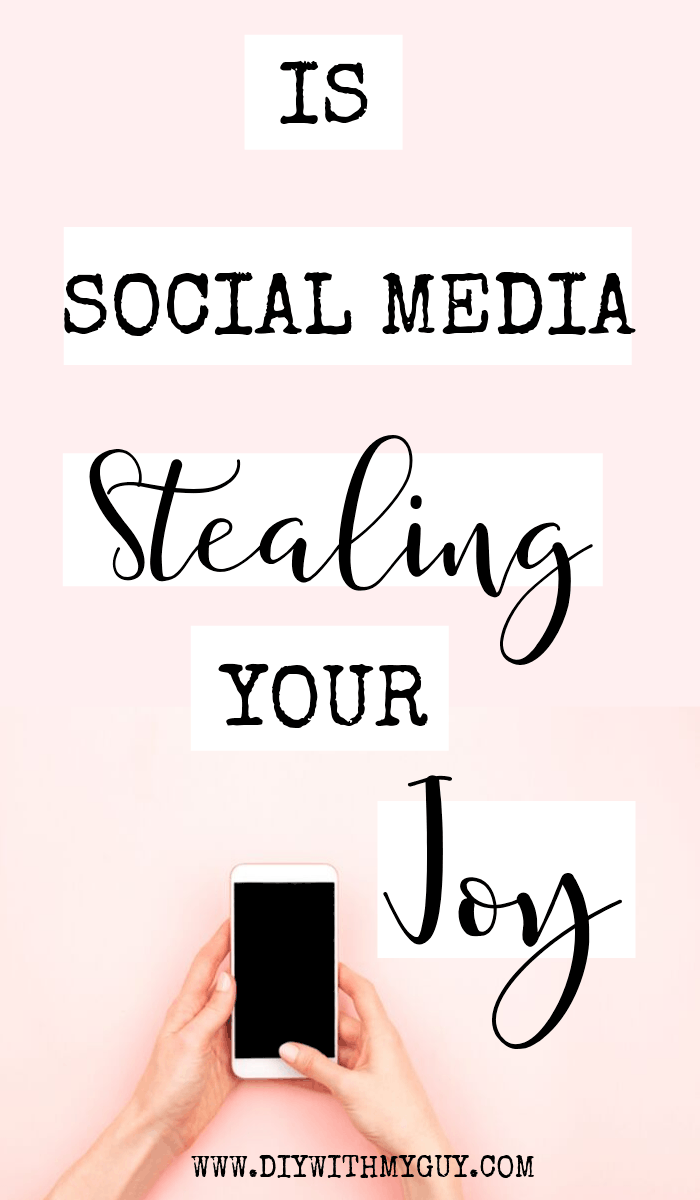 Taking A Break From Social Media

I recently took a break from social media. I took this break because I realized that social media was STEALING MY JOY!

It was a little hard, and I admit I still clicked those small little squares on my phone daily only to be reminded that I was no longer logged in.

It was quite disappointing to realize every time I had my phone in my hand I would automatically click a social media app.

I did it unconsciously.

That’s when I knew it had become a habit.

I bad habit that I didn’t want to have. Smartphone addiction is a real thing!

I would like to think that I have strong willpower, so this was a challenge.

I started to doubt myself.

I started to compare.

All the while knowing that most people put their best face forward, ESPECIALLY on social media.

Comparison is the THIEF of JOY”

For the most part, people want you to see them achieve.

We have all become little Nellie Olsons!

We love bragging on social media.

Whether we truly know that we do it, WE DO!

That alone was a big epiphany for me because I don’t like attention. Attention has always made me feel uncomfortable.

So bragging was something that I thought I didn’t do. But guess what, I did.

On social media, I became a fake version of myself.

When I realized this, I took a break from posting; however, I STILL did some scrolling. That’s when it really became apparent how fake most people were.

Even the people I knew well, would in privacy tell me one thing small, but on social media completely applaud it and blow it entirely out of the water.

These people I knew very well, and they were not fake at all in person, but their social media profiles painted a very perfect picture of their very imperfect lives.

So that was it, I couldn’t take it any longer, DEACTIVATE!!

Deep breath in, exhale, what a blissful time it has been!

Not only has it been blissful, but I have more time, way more time. I have tackled projects that I had been putting off because I “didn’t have enough time.”

I was living more in the moment. I truly concentrated on my children’s stories, on the games they wanted to play, on the jokes they told.

There was no phone in my hand!

That anxiety from comparing was GONE. Totally gone! I didn’t care what anyone was doing, except for the ones living in my home with me.

I started to see the beauty in the world because I no longer checked my social media while on the park bench at the park.

Instead, I felt the breeze, I smelled the honeysuckle, I watched the geese, and it was AMAZING.

Waking up from a social media coma, coming back to reality where I realized my life is good, my life is REALLY good!

Finally free of distraction, I started to live my life more INTENTIONALLY!

Living intentionally is what makes us put down our phone, stop comparing, turn off the TV and LIVE in the MOMENTS THAT MATTER.

It has made me so much more grateful, with less stress and no anxiety.

I wake up happy and go to bed happy.

Intentional living is loving the life you have or taking all the steps in the right direction towards a life you want. Grab my Free Guide 5 Days to Living a More Intentional Life.

Tips on How to Take a Social Media Break

2. Delete the apps from your phone and tablets.

4. Hang out with OFFLINE people, you know the people who don’t check their phone constantly.

Have you taken a SOCIAL MEDIA BREAK?

I would love to hear about the positive impact it made on your life.

It's crazy because we use social media to keep in contact with people yet it brings us down. At times it gets me down because I'm like "I wish this was my life" even though I don't truly know what goes on behind the picture.

Relatable! I took a break from social media for about 6 months earlier this year. I permanently deleted Facebook and Instagram. I was so happy, calm, focused on myself. I got a weekend job along with my studies, I got more serious about my studies, joined the gym, went on mini vacation, I was spending quality time with my friends when we were together. I recently got back on Instagram, but deleted it again. It's just not for me anymore. I have no need to prove myself to others or to share my life, and I am not interested in others'. I have a few close friends but we talk and hang out offline. I didn't miss anything while I was away.

Ivona, I'm so glad you could relate. What blissful time we can all have when we focus on OUR life instead of the fake social world.

Yes! I recently took a week long break from social media because I was feeling the same way as you. I felt less anxious, happier, and more productive. It’s amazing how it can make us feel so bad about ourselves. I’m back on but my approach to it is much different... if I get caught up in it again, I know to just take a break!

That's great Kristina! I think taking a step back, gives us the opportunity to see what we are missing in real life. It also makes us more self-aware, just like how you know now when it's time to take a break.

This article deserves a standing ovation and a big round of applause! I believe very strongly that social media is stealing our joy. Furthermore, I believe that it has caused a tremendous communication breakdown everywhere. It fills me with great sadness and alarm that many people nowadays are unable to even carry on an intelligent verbal conversation with one another. Aside from that, there is a huge decline in literacy among the student population in this country, and in my opinion, this is a horrible consequence of social media. Last but not least, people have become so dependent on social media that they hardly ever want to give hugs or reach out to touch anyone, no matter how well-meant the touch may be. The sense of touch is a very healing thing, and this has even been stated by the medical community. All those little abbreviations that show up on a computer screen will never, and must never, take the place of the sound of a friendly voice in conversation or a hug or a loving touch to console or comfort another human being. This was a wonderful article, and this issue certainly needed to be addressed.

Very well said, Effie. You are correct that our technological social circles are diminishing our real human relationships. Also, texting, being as simple as it may be, does remove the personal feeling of hearing someone's voice. Not to mention how many times people do misinterpret the feelings behind a text anyway. It's all so robotic now.

I couldn't agree with you more! Social media is definitely stealing the joy away from many people. Upon reading this article, I was immediately reminded of a story that was told to me by a friend of mine. She told me that a few weeks ago, she had decided to invite her kids to the home for supper, as they all were living away from home at the time. As it turned out, however, when everyone arrived and began eating supper, they also started participating in various forms of social media via their cell phones. Needless to say, this frustrated their mother so much that, after awhile, she finally came right out and asked them why they came there in the first place. She further asked them if they came there to visit with her, or did they merely come there to remain on their cell phones all evening. In conclusion, my opinion is that by staying on their phones like that, they ruined what could have been a very enjoyable evening of laughter and genuine conversation with their mother. SO SAD!

He's a welder & I'm a writer. Together we are building our story three projects at a time. So please stay a while and read about budget-friendly projects that turned this house into a home!